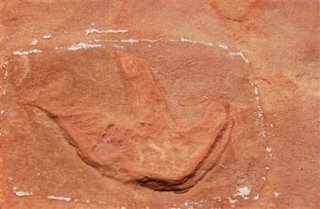 Scientists trying to study more about dinosaurs are snapping aerial photos of tracks left at the back millions of years ago close to southern 's Coral Pink Sand Dunes.

Researchers in a specially set helicopter crisscrossed an area called the track site, shooting photos of fossilized footprints spotted across the red sandstone. Alan Titus, a Bureau of Land Management paleontologist, said it's the first time a helicopter has been used to catch full images of a track site. The tracks were left by at least six species of dinosaurs — few with three toes, others with five — that roamed the landscape regarding 180 million years ago.

The camera, able to select up tracks as small as a centimeter, will provide scientists a bird's-eye sight of footprints dotting the 3-acre site. The photos will be used to help make maps of the tracks and three-dimensional images therefore scientists can better recognize and understand dinosaur behavior. They'll as well be used on interpretive displays for visitors.

The fossilized tracks have been recognized locally for years at , a well-liked spot for ATV riders. BLM scientists investigated final fall and found tens of thousands of tracks, ranging from bird-size footprints to others left by animals that were possibly 20 feet long. The tracks have been linked to three-toed species alike to the horned Dilophosaurus and five-toed animals related to crocodiles. Titus said that the site, which at present stopped to motorized traffic, was probably an oasis where early Jurassic dinosaurs found water and relief from desert-like temperatures. Matthews has taken related photographs at a track site close to . Those were taken with the help of an airship.