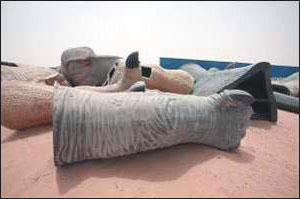 DUBAI-Lurking behind a billboard on Emirates Road, a dinosaur lies disconcertingly in pieces between the sandy foundations of what will turn out to be Dubai’s biggest mall and part of a growth that will be home to 40,000 people.
The City of Arabia, which will someday be the “Heart of Dubailand”, is still in its infancy, with the uppermost structures standing just three storeys tall. But Alex Vacha, the deputy director for projects, says it is on way and the first apartments will be handed over at the end of next year. The 20-million-square-metre development, which will charge US$5 billion, will be done in two phases.
The park, with its lifelike group of animatronic dinosaurs, plans to transport visitors to the Jurassic era and will mark amusement rides, Earth-science museum and planetarium. The growth still appears like a sand pit still the infrastructure has been laid down and the wadi bridges are complete. The next huge phase for the development will be a new interchange across Emirates Road that will connect the Mall of Arabia and the rest of the development with a new road that will run straightly from Sheikh Zayed Road. The first phase of the mall starts in 2010.