Jesus, Dinosaurs, and the Dangers of Religious Dogma 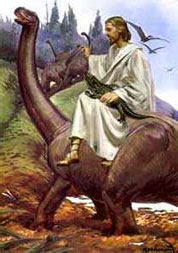 Curriculum of the ‘Accelerated Christian Academy’ in Mosta teaches kids dinosaurs were used to construct ancient pyramids in Egypt.

In accordance with at least one Evangelist pastor, Vince Fenech, of the wholly licensed, State-approved Creationist institution, trusts and teaches children from ages 4 to18, that dinosaurs helped build the pyramids. Citing a so far undiscovered Biblical reference in the Book of Job, Fenech violently injures credulity and incredulously asserts to reporter Raphael Vassallo, of the MaltaToday newspaper, that the world was “created in 4004 BC”, and the ancient Egyptians harnessed the power of Jurassic-period dinosaurs to put up the Great Pyramid of Giza.

Pastor Vince Fenech is of course, a Creationist and eager espouser of a bevy of ideas that not only contests his good sense, but as well baselessly suspends science in the name of God; mainly that the Apollo 11 moon landing confirms “the universe is still young!”