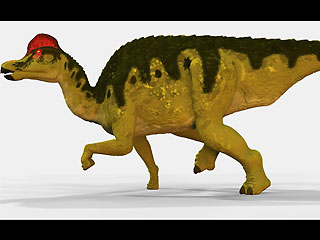 The duck-billed hadrosaur grew to adulthood much faster than its predators, for example tyrannosaurs, a new learning suggests. The study showed, By about age 10, the plant-eating hadrosaur called Hypacrosaurus stebingeri had possible ballooned to its adult length of 30 feet (9 meters) from nose to tail tip. In the meantime, the meat-eater and hadrosaur-enemy Tyrannosaurus rex would have still been a relative pipsqueak at that age, not reaching mature size until 20 to 30 years of age. The researchers say that the size difference would have forced carnivorous dinos to hunt juveniles of H. stebingeri. Once T. rex reached mature size, about 40 feet (12 meters) in length, the tables would of course turn, with the meat-eater coming out on top.

Cooper and her colleagues compared growth rate data from H. stebingeri with three predators, all of which lived in the Late Cretaceous time from about 100 million to 65 million years ago: the tyrannosaurs Albertosaurus and its huge relative T. rex, with the small Troodon formosus, which reached just 6 feet (1.8 meters) in length and sported a quite huge brain. For the hadrosaur, Cooper and her colleagues examined thin sections of long leg bones and counted and measured the growth rings, which all specify a year of life. When it died this individual dino was about 13 years old.

Drew Lee, a postdoctoral fellow in Ohio University's College of Osteopathic Medicine who worked with Cooper on the finding said that ”The duck-billed dinosaur grew three to five times faster than any potential predators that lived next to it and by the time the duck-billed dinosaur was fully grown, the tyrannosaurs were just half grown -- it was a huge size difference”. Researchers said that the Hypacrosaurus moreover reached sexual maturity early, at only two or three years of age.