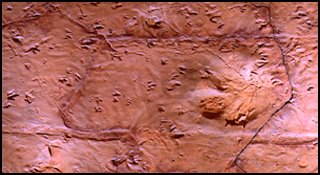 Discovered in the 1960s and excavated by the Queensland Museum and the Australian Army, the Lark Quarry dinosaur trackway is the best example of dinosaur tracks in the world. It is located 110km SW of Winton. Here, now exposed in a small quarry, are thousands of dinosaur footprints recording the events of a few moments in time 95 million years ago. Over 3000 footprints, made by nearly 200 individual dinosaurs, were found at the site. Three main types of dinosaur track are present: a small track from a coelurosaur, which was about 13-22cm at the hip and a large group of tracks from orithopod dinosaurs which were between 12-70cm at the hip. The third type of footprint was a large flesh-eating dinosaur which left footprints nearly 60cm long. It would have been about 2.6 m at the hip, a very large dinosaur indeed.
Posted by Tamil Nadu ,Tamilnadu Government,Places,Wild Life,Hill Stations,Temples,Sports,Accomodation,Cusine,Fine Art at 2:54 AM