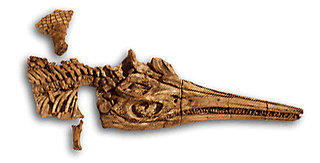 Platypterygius was a large ichthyosaur (not a dinosaur) which grew to 6 or 7 metres long. It inhabited the inland sea between 110 and 100 million years ago. Fossils of this animal are amongst the most common of the large marine reptiles found in Queensland. Platypterygius was a fast and agile swimmer. It swam by moving its tail from side to side and steered with paddles or fins. It gave birth to live young. It would have eaten squid, fish and ammonites. The fossil remains of a hatching and its mother were discovered in Queensland in 1988. The name Platypterygius means broad-fin.
Posted by Tamil Nadu ,Tamilnadu Government,Places,Wild Life,Hill Stations,Temples,Sports,Accomodation,Cusine,Fine Art at 2:33 AM