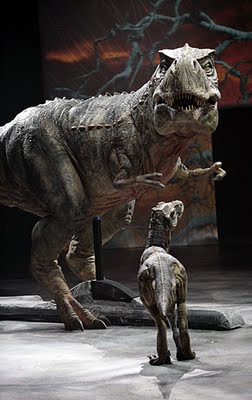 If the dinosaurs had dentists to take care of their teeth, they would have been possibly alive today.

At least, this is the picture that is rising out of a new research by scientist of David Varricchio and colleagues.

Infectious diseases can be transmitted by touching ,sneezing, or biting each other on the face, a habit that may have driven the dinosaurs to extinction through the transmission of a protozoan parasite.

This led the scientists to realize that a protozoan parasite was to blame for the diseased jawbones seen in many tyrannosaurid fossils.

The parasite’s modern-day equivalent, which infects birds, eats away at the jawbone and can cause ulcers so ruthless that the host starves to death.
Living in the jaw, the parasite may have been transfered from one dinosaur to another dinosaur during head biting.

According to Jacqueline Upcroft, a member of f1000 Biology, “This organism generally infects pigeons, doves, turkeys and raptors, causing necrotic ulceration in the upper digestive tract,” and in extreme cases it can fully pierce the bone.
The similarity of the fossilized jawbones and modern-day samples imply that the parasite was deadly enough to kill infected dinosaurs.

“This may not have been an segregated situation but may have occurred en masse and led to the Extinction of the Species,” said Upcroft.