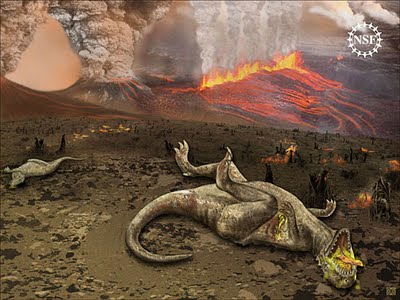 The asteroid impact that ruined the age of dinosaurs 65 million years ago didn't incinerate life on our planet's surface – it presently broiled it, a new study suggests. The work resolves nagging questions about a theory that the affect triggered deadly wildfires around the world, but it also bring up new questions about just what led to the mass extinction at the end of the Cretaceous period.

The impact of a 10-km asteroid is liable for the extinction of the dinosaurs and most other species on the planet. Early computer models demonstrate that more than half of the debris blasted into space by the impact would fall into the atmosphere within eight hours.

The models predicted the rain of shock-heated debris would radiate heat as intensely as an oven set to "broil" (260 °C) for at least 20 minutes, and maybe a couple of hours. Intense heating for that extend would heat wood to its ignition temperature, causing global wildfires.

Yet some species survived, and the global layer of impact debris doesn't contain as much soot as would be expected from burning the world's forests, raising questions about the scope of post-impact wildfires