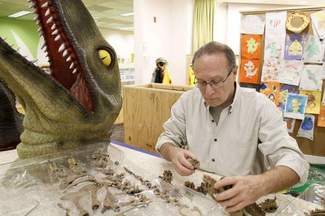 Volunteer Mitch Siegel of Waukegan helps assemble a T-Rex dinosaur skeleton as the Waukegan Public Library gets prepared for the "Dig the Dinosaurs" display, to celebrate the one-year anniversary of the Early Learning Center.

With the scratching sounds of a prehistoric jungle echoing overhead, visitors to the Waukegan Public Library's Early Learning Center are now being welcomed by a smile much toothier than they are accustomed to meeting.

To celebrate the one-year anniversary of opening the ELC, the Waukegan Public Library renovated its ELC facilities for three days and reopened them on November 15 with a new look and feel, gathering dinosaurs into nearly all facet of the space with "Dig the Dinosaurs."