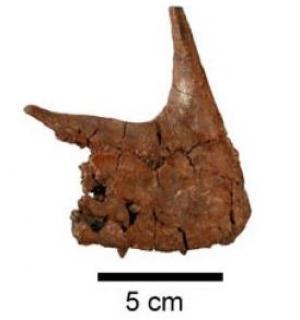 The innovation of a new species of dinosaur from the early Jurassic period (approximately 195 million years old and seven metres long) has been announced and described by Dr Adam Yates, the primary investigator and a palaeontologist from the Bernard Price Institute for Paleontological Research (BPI) from the University of the Witwatersrand, Johannesburg, South Africa.

The vegetarian dinosaur, one of three exposed at the same site, was named Aardonyx celestae -- the genus name (Aardonyx) means "Earth Claw," (Aard -- Afrikaans for Earth) and (Onyx -- Greek for claw) an suitable name, given that the large, earth-encrusted foot claws were some of the first bones to be discovered in the town of Senekal, near Bethlehem in the Northern Free State, in South Africa. The species name (celestae) is specified to acknowledge the occupation of Celeste Yates who prepared much of the fossil.

"This species is vital as the Aardonyx was an animal close to the general ancestor of the huge sauropod dinosaurs," explains Yates. "Sauropods, known widely as "brontosaurs," were the largest backboned animals to walk on land with their long necks, tree-trunk legs and whip-like tails.