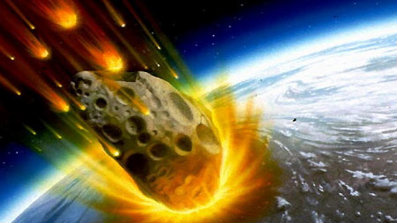 New research challenges the thought that the asteroid impact that killed the Dinosaurs also sparked a global firestorm.

Scientists modeled the consequence that sand-sized droplets of liquefied rock from the impact had on atmospheric temperature. The asteroid is thought to have gouged away the Chicxulub crater on the Yucatán Peninsula in Mexico.

Formerly it was thought that the falling spherules, as the tiny rocks are called, heated up the atmosphere by several degrees for up to 20 minutes — hot enough and long enough to cause whole forests to spontaneously burst into flames.

As evidence for this, scientists pointed to what appears to be carbon-rich soot from burned trees exposed in the thin band of debris dating back to the impact some 65 million years ago, a shift in geologic time called the K-T boundary.