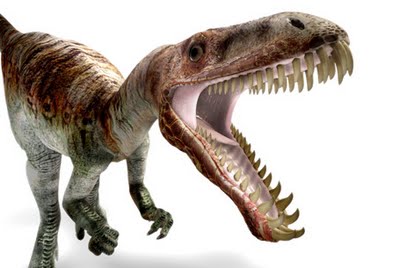 Well-preserved fossils of a feathered dinosaur that exist about 124 million years ago — along with certain aspects of its teeth and skull — imply that the turkey-sized creature was venomous.

Sinornithosaurus was unearthed in China and first described by scientists about 10 years ago, but the telling details of the creature’s cranial anatomy are just now being described, says David Burnham, a paleontologist at the University of Kansas in Lawrence.

The majority of the teeth in each side of the creature’s upper jaw have grooves that run from the base of each tooth to the tip, a characteristic seen in some of today’s venomous reptiles. A huge triangular depression on the creature’s upper jawbone — a feature not previously reported in other dinosaurs or their relatives — probably held venom-producing glands, Burnham and his colleagues report online December 21 in the Proceedings of the National Academy of Sciences. Venom curving from those glands probably pooled in reservoirs at the base of each grooved tooth until the dino bit its prey, Burnham says.