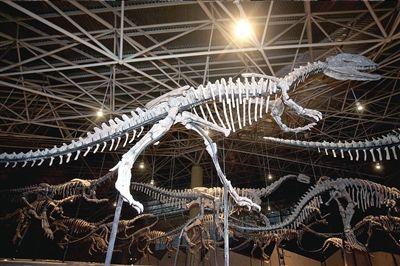 BUENOS AIRES: A Species of Dinosaur that existed 190 million years ago has been found in Argentina, a researcher said.

No discoveries with these uniqueness had been made in the region. “It's an significant discovery because it helps us understand the environmental diversity of the period," researcher Santiago Bessone of the Museum Egidio Feruglio, an institution based in the Argentine Patagonian city of Trelew that was accountable for the expedition, told EFE.

The experts exposed on Bayo mountain , some 80 km from the Patagonian town of Gastre, fossils of at least two dinosaurs that actually lived during the Jurassic period and about which little is known, museum experts said.

The scientists suspected that in the area there could have been Dinosaur Skeletons from the herbivorous sauropod family, which measured between 15-20 meters long and had a small head, big feet ,long neck and a powerful tail.

These dinosaurs roamed the Earth at a time when mammals did not yet survive and when the climate and flora were very different from what they are today, the scientists said.

Bessone, a member of the team,said:The expedition, which took place last month, "lasted about 20 days and now we are fully into the stage of studying and investigating the fossils in detail".

During their explorations, financed by German scientific institutes, the researchers found numerous bones, many of them embedded in heavy blocks of stone that still have not been moved from the place they were found, some 1,400 km south of Buenos Aires.

The skeletons are not complete, but it was likely to gather bones from the front and back legs, hips and spine.

The researchers also found "fossils of very primitive flying reptiles" of the pterosaur family that measured more than a meter long and were agile in flight, supported by wings with hollow bones.