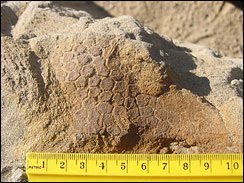 As much as paleontologists have sorted out about the Dinosaurs, one of the chief aspects of their appearance-what color they were-has remained mysterious. But in a new Nature study, a team of British and Chinese scientists report that they establish a way to unlock the color patterns of one of the earliest feathery dinosaurs-it had a red mohawk, they say, with a red and white striped tail.

The dino in question is called Sinosauropteryx, which existed about 125 million years ago. Looking at Fossils originate in China, the team led by Mike Benton found what they think are the remains of feathers. And they found a bit inside the feathers that matches modern birds: melanosomes.

These structures offer the melanin pigment in bird feathers (and human hair), and what color they are depends on the shape. “A ginger-haired person would have more spherical melanosomes, and a black-haired or grey-haired person might have more of the sausage-shaped structures,” said Professor Benton.