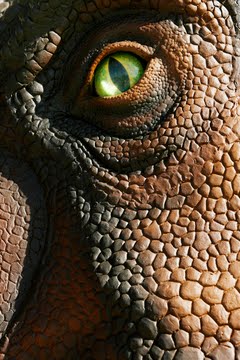 Dinosaurs last ruled the earth 65 million years past, but for the next three months they will rule no less than 6,500 square feet of it.

The Gulf Coast Exploreum Science Center — the REX-ploreum, if you will — will stock its patio with 10 animatronic creatures guaranteed to thrill the adolescents and charm their parents. The courtyard, transformed with plants and a waterfall, among other cosmetic flourishes, will showcase the usual suspects including the stegosaurus, triceratops and the vicious Tyrannosaurus-rex.

The exhibit, owned and organized by Billing Productions Inc., is titled Dinosaurs Downtown! and starting after that weekend, Mobilians can listen to the roar. (See information box.) The traveling display has toured large markets including San Diego, Detroit and Cincinnati. The Exploreum will be Billings’ primary science center venue.