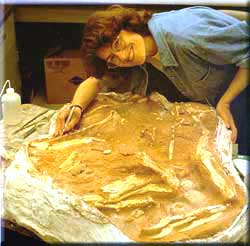 A Dinosaur fossil discovered in northwestern China has gave fresh evidence that although its tribe resembled birds millions of years ago, it must have evolved separately - helping confirm that modern birds are indeed living dinosaurs.

It lived a full 160 million years before in the Jurassic period, long before the feathered Archaeopteryx, the first true flying bird, emerged in the fossil record, scientists said.

The newfound Dinosaur is a member of a group that some scientists had thought evolved into modern-day birds. However, because this fossil is so old, it gives weight to the dominant sight that modern birds, not the newly discovered birdlike creatures in China, were the ones that evolved from dinosaurs.

Like a bird, the dinosaur had 3 toes on each leg, a birdlike keel-shaped chest and a long beak. The ten-foot-long dinosaur, named Haplocheirus sollers or "simple, skillful hand," had short forearms with massive claws.