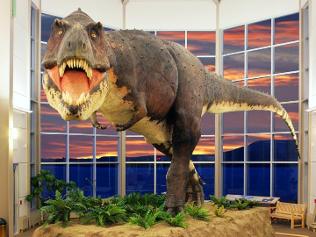 About 77 million years before the juvenile duckbill dinosaur was attacked on the plains of what is now known as Montana, US, by a pack of Jurassic predators.
Fatally wounded, the young Brachylophosaurus struggled to the border of an inland sea, where he sank into the soft sand and died.

The salt water mummified him, preserving the wrinkles and scales on his skin and even his final meal of conifers and magnolia-like plants.

He remained buried until he was noticed north of Malta, in central Montana, in 2000.
Named after graffiti carved in a nearby rock, Leonardo is now a worldwide palaeontological star and a foremost attraction at the Great Plains Dinosaur Museum in Malta, one of the stops along Montana's so-called Dinosaur Trail.

The Dinosaur Trail links collectively a series of dinosaur-related museums, laboratories and archaeological sites including the Great Plains Museum.
The idea of a dinosaur trail was daydream for local tourism authorities who wanted to capitalize on the state's wealth of Fossil resources.