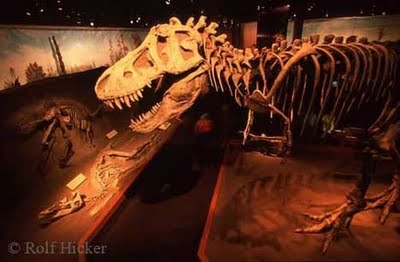 A book of dinosaur fossils found out on the Korean Peninsula was published on Tuesday, a rare photo guide to the reptiles that left their last footprints on southern coasts 80 million years ago.

The publication by the National Research Institute of Cultural Heritage, a state-run preservation agency, tracks a series of landmark discoveries in the country last year, including the fossil of a horned dinosaur that scientists say is an unknown species, and footprints of a baby dinosaur that are the smallest of their kind found so far.

Paleontologists say dinosaurs existed in Korea from 120 million to 80 million years ago, throughout much of the Cretaceous period, the last stage of the Mesozoic era and the heyday for dinosaurs. Their fossils, relatively well-preserved and discovered in a richly diverse spectrum across the southern South Korean coasts, at present registered on a tentative list of the World Heritage site, en route to gaining major recognition.

"Many of them were only known in academia, and the major merit of this book is that it comes with photographs and effortless texts so that they can be known to ordinary people. Our idea was that people can use it as a guide when they go observe the footprints," said Lim Jong-deock, chief curator at the institute and one of the seven co-authors of the book, "Dinosaur Fossils of Korea." Lim stressed the book is the primary full collection of Korean dinosaur fossils designated as a natural heritage here. Its English edition is expected later on this year.