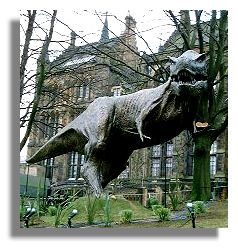 Something big is coming to the South Florida Science Museum starting January 16th through May 2nd, 2010. Diggin' Dinosaurs: An Adventure Millions of Years in the Making features many of the most feared terrestrial carnivores including the gigantic Giganotosaurus, a genus of carcharodontosaurid Dinosaur that existed 98 to 96 million years ago, to other larger-than-life predators including, the Monolophosaurus, Tuojiangosaurus, Tyrannosaurus rex and Velociraptor. This hands-on exhibit allows visitors to experience dinosaurs by handling an Oviraptor egg, excavating a skeleton, or taking a turn at the Wheel of Dinosaur Misfortune.

The South Florida Science Museum is hosting "Diggin' Dinosaurs" as part of the celebration commemorating the finding of Suzie, the Ice Age mastodon currently on display at the Museum. The skeleton was found in superb condition during an excavation project in West Palm Beach in 1969. Suzie was a juvenile mastodon, a type of pre-historic elephant that wandered Florida and much of North America during Earth's most recent Ice Age.

The South Florida Science Museum has been a resource for scientific information for almost a half century with the mission of exciting curiosity and furthering the understanding of science and technology. Through a strong partnership with the School District of Palm Beach County, the Museum serves as a resource for exploring which compliments and supplements formal educational environments. Diggin' Dinosaurs: An Adventure Millions of Years in the Making is a paleontology based exhibition that is expected to welcome school students, as well as residents and visitors from Palm Beach County and beyond.