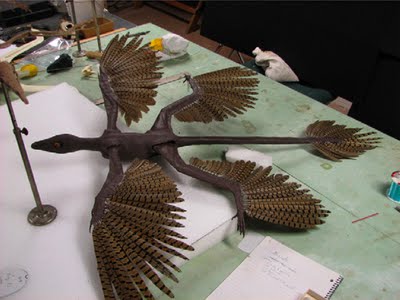 A hand-built model of an early flying dinosaur may explain precisely how the four wings of Microraptor gui helped it glide down from trees.

Basing their work on a cast of a very fresh-looking fossil, University of Kansas scientists created a model airplane-like mock dinosaur made out of plywood, balsa, and carbon fiber. Then, they attached one of three sets of test wings of dissimilar configurations to the body with rubber bands. The wings even featured real bird feathers whittled into likely shapes.

We went rear and forth. We thought, maybe we’ll do 3-D graphics and it’ll look actually cool. But it’s more precise to do the modeling directly from the specimen, said Dave Burnham, a paleontologist at the University of Kansas and co-author of a new paper on the work in the actions of the National Academies of Sciences.

Microraptor gui was a little dinosaur species that lived about 120 million years ago. About two dozen specimens have been recovered from close to Liaoning, China. The Kansas team was lent one well-preserved fossil, from which they began their rebuilding efforts.

With the model in hand, they were capable to test how the animals might have glided, by attaching them to a catapult that imparted a reliable amount of thrust to send them flying through the air. By measuring the distances that the dissimilar wing configurations allowed the model dinosaurs to fly, they were able to determine which wing type would have been most competent.

The biomechanical reconstruction of flying creatures not seen today is a tricky business. Burnham and his collaborator, University of Kansas paleontologist David Alexander, argue that the birds most likely glided with their legs splayed out — not unlike a flying squirrel.

Others argue for a dissimilar wing configuration, in which both sets of wings are parallel to each other, what they call a biplane configuration. Sankar Chatterjee, a paleontologist at Texas Tech, and R. Jack Templin, an independent scholar, say that as an alternative of splaying out like a squirrel, the animal would have tucked its legs below itself.