Birds Got Too Fat to Fly After Dinosaurs Vanished? 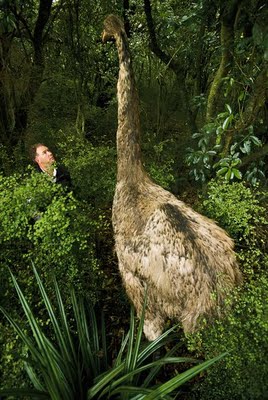 It's been long thought that the ancestors of emus, ostriches and other flightless birds that flew once were flightless too. But a latest study says that they only began exploring the ground in earnest after Dinosaurs were wiped out about 65 million years before.

The unexpected disappearance of dinosaurs opened up new, predator-free niches, where food was plentiful and flight wasn't required for quick escapes, said study leader Matthe Phillips of the Australian National University in Canberra.
The birds then got so plump that they became too heavy to fly, whether they desire or not, the study suggests.

Using Fossil DNA, Phillips and colleagues examined the genome of a giant moa, an extinct flightless bird that lived in what is now New Zealand.

The team establish that the moa's closest relatives were tinamous—small ground-dwelling birds still found in South America that can barely fly.

During most of the Cretaceous period (146 to 65 million years ago), South America, Australia, New Zealand, and Antarctica were joined as part of the massive southern continent Gondwana. About 80 million years before, New Zealand drifted away from Gondwana.

The researchers propose that a moa ancestor may have flown from another location—possibly what would become South America—to New Zealand, where the bird hopped to the ground and eventually evolved into the moa.