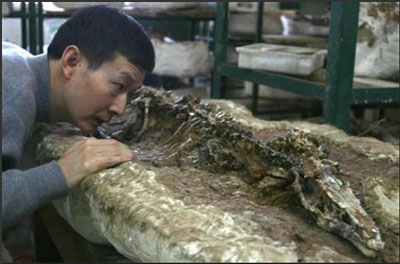 China has made yet another astounding finding that is transforming everything we thought we knew about Dinosaurs - a 160 million-year-old creature that holds the claim that modern day birds are in fact dinosaur descendants.

In a Reuters interview by Dr. Xu, a member of the research team that found out the fossil, as having "unique features... it shares few features with birds. It shifts its hands sideways, like how birds can fold their wings. Its head, hind limbs, vertebral column, hands are all bird-like." That makes it... a lizard parakeet?

The Fossil was discovered in Xinjiang and is a member of the Alvarezsaurs family, this grandpa of a fossil predates all other discoveries by over 63 million years. The fossil shares numerous similar features to birds, but at this point in history was distinctly a dinosaur.

Because it is older than other fossils, it offers an significant link in the evolutionary record showing how birds have slowly developed from dinosaurs. Now we can say with more certainty that our feathered friends are in fact prehistoric living dinosaurs, which is pretty cool.

The fossil is one of 132 latest dinosaurs found by China. Some of our other incredible and long named Dinosaur discoveries comprise a dinosaur with four wings called Anchiornis huxleyi, a gigantic bird raptor called Gigantoraptor Erlianensis and a small feathered dinosaur called epidexipteryx.