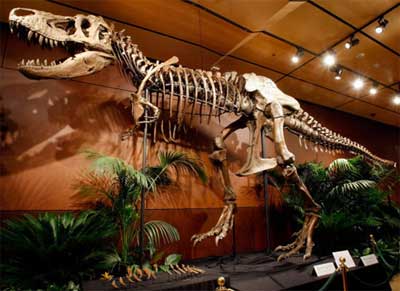 The Fossils came from the Grand Staircase-Escalante National Monument and will stay in Ogden until they have been cleaned and well preserved. After that, they'll end up in the Utah Museum of Natural History in Salt Lake City as a latest exhibit.

Gigantic pieces of fossil, still encased in rocks, were wrapped in burlap and plaster before being lifted by helicopter out of their remote desert home. The packages can weigh more than thousand pounds.

The bones arriving in Ogden are generally from the animal's arms, said Mike Getty, University of Utah UMNH collection manager of paleontology.

Other pieces of bone have been extracted and cleaned by different teams in the state, but these came to Ogden because the dedicated team of volunteers would be able to clean and set up them by August, in time to be mounted for exhibition, said Alan Titus, Monument paleontologist.