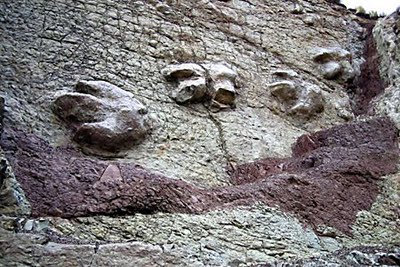 Around 300 Dinosaur footprints believed to be about 65 million years old were lost when the rock wall that contained them cleaved off and crumbled, a Bolivian national park director said Wednesday.

"That rock wall is about 140,000 square meters (1.5 million square feet) and piece of it collapsed. We've missed 300 footprints" made by two titanosaurs, he added.

The Dinosaur tracks were wiped out on Tuesday, Astete said, adding that efforts to safeguard the complete rock wall from fracturing would cost up to 30 million dollars a year, far exceeding the reach of the park administration's budget.

Regardless of the loss, the park remains the site of one of the world's largest collection of dinosaur tracks, Astete said.

Some 5,000 footprints left by 300 Species of dinosaurs from the Cretaceous period (65-145 million years ago) are embedded in the rock face at Cal Orcko, which is situated a few kilometers outside Sucre, Bolivia's constitutional capital.

Local authorities said they were learning plans to protect the archeological site from further damage.

The trackway is amazing, and does features several thousand tracks, but it does not represent "300 species" of dinosaurs. That's the approximate number of striding _trails_, which involve about eight different dinosaur species.