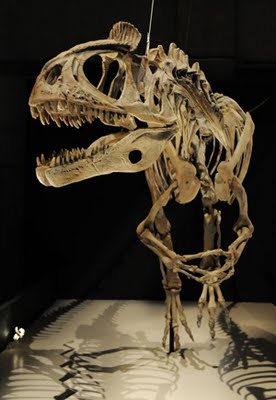 Scientists, such as Dan Chure, refer to sauropods, the gigantic, long-necked plant-eating Dinosaurs, as "headless wonders."

Not only are their noggins puny in relation to their colossal bodies, but very hardly do paleontologists ever recover entire sauropod skulls, said Chure, of Dinosaur National Monument. But a fresh species unearthed at the monument several years before was identified from four skulls - two fully intact - found within a few feet of each other.

Abydosaurus mcintoshi was recognized to the world Tuesday in the German science weekly Naturwissenshaften, where Chure published findings with Brigham Young University collaborators. The new sauropod is supposed to be a distant descendant of brachiosaurus, which roamed Utah 150 million years before.

Discovering just one skull would be impressive, but four is beyond what any Dinosaur hunter could hope for. The skulls revealed jaws crammed with dozens of minute teeth.

"It's a fortuitous thing. In numerous dinosaurs, the bones of the head do not fuse up, especially in sauropods. You have an array of components that are held collectively by soft tissue. The only thing that resides together is the brain case," said Brooks Britt, a BYU geology professor.

National Park Service employees initially discovered an interesting cache of bones near the monument's visitor's center in the late 1990s and enlisted Britt's help to prepare the specimens.

The monument is well-known for Dinosaur Discoveries made in late-Jurassic-era Morrison Formation. But these new bones were in the younger Cedar Mountain Formation, a 105-million-year-old sandstone that dates the bones to the middle of the Cretaceous, the 3rd and final chapter of dinosaurs' reign that ended 66 million years ago.

After the initial find, park staff delivered a 3-ton block to BYU's Museum of Paleontology.