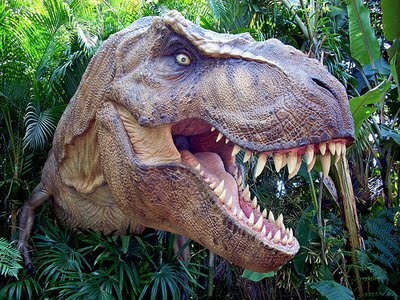 It's been about 65 million years since the Albertosaurus roared into town, but the fearsome carnivore has decided it's time to come home.

Dinosaur fans trapped their first glimpse Friday of a temporary Calgary Zoo exhibit that brings to life 20 prehistoric behemoths, including creatures that once stalked Alberta's forests.

The extinct beasts will split their home with the park's original dinosaur residents. As well the Albertosaurus, the giant visitors include a Pachyrhinosaurus -- a "polar dino" that roamed the province in large herds -- and the menacing, massive Allosaurus, known for its sharp teeth and killer claws.

The display -- dubbed Dinosaurs Alive -- is interactive, meaning these predators blink, roar, move their limbs and arrive to life.

Zoo officials expect the exhibit will inject fresh life into Prehistoric Park, built in the 1980s as a tribute to Alberta's rich dinosaur history.