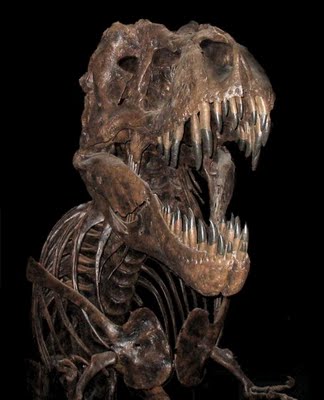 One of the strangest watches in the world is being presented by Louis Moinet, using real Dinosaur Bones in its mechanics.

Most people anticipate to see dinosaur bones in national museums across the globe, yet one pioneering watch firm is allowing history fans to observe them every time they glance at their wrist.

Louis Moinet has announced its Jurassic Tourbillon, which contains fragments of Dinosaur bones in the dial which are dated at 130 million years old and forms part of a new series of novelty timepieces quite exactly named Time Explorator.

The hand-wound mechanical watch also has an impressive 18 carat white gold case and also comes with a bezel and horns that employ no fewer than 56 Wesselton VVS baguette diamonds.

On top of this, the watch also has three dials, while it uses an anti-reflective sapphire crystal front to ensure that reading it is simple in any situation.

Earlier this week, Happy Hour Watches - a wholly cheaper alternative to the dinosaur watch - revealed that its timepieces let buyers to tell the time and, should they want to, open a bottle of beer at the same time with a fancy clasp.

Enjoyed reading the article above, Very interesting, and thanks for sharing!! Keep posting such informative posts. Armani Watches Sale