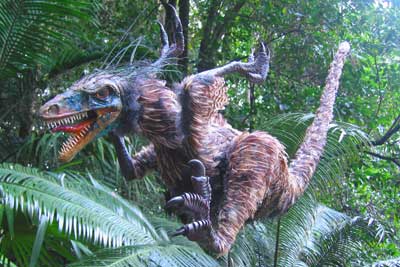 The flexible wrists of birds that let them fold their wings have now been seen in Dinosaurs well before flight, scientists discover.

Dinosaurs such as Velociraptor might have partly folded their feathered arms to guard such plumage from harm's way, researchers explained. The wrists and the feathers in the lineage that direct to birds then became more extreme, laying the groundwork for flight, they added.

Although birds are most known for their feathers, wings and toothless beaks, another distinctive feature is a wrist joint that is very flexible, although only in one direction.

A bird can bend its wrist to the point where the side of the hand where the little finger would be can lie closely along the forearm, so any fingertips would point back almost towards the elbow, but the wrist cannot bend in the opposite direction, nor even fully straighten.

This unique joint allows a bird to fold the wing when at rest, and to partly fold the wing during the upstroke in flight, greatly improving the efficiency of their flight.