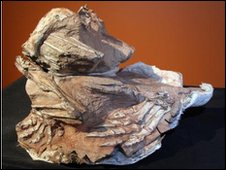 Researchers have found out a nearly complete Dinosaur Fossil which appears to have been caught in a collapsing sand dune.

The Seitaad ruessi fossil, illustrated in the journal PLoS One, is a relative of the long-necked sauropods that were once Earth's biggest animals.

S. ruessi, discovered in what is now Utah, could have walked on all four legs, or risen up to walk on just two.

It is from the Early Jurassic period, between 175 and 200 million years before.

At that time, all of Earth's continents were still joined in the super-continent Pangaea, and sauropodomorphs like S. ruessi have been originate in South America and Africa.

Unlike the sauropods to which they are associated, S. ruessi was relatively small, about a metre tall and 3.5-4m long with its lengthy neck and tail, weighing in at between 70 and 90kg.

Much of the fossil, first found out by a local artist in 2004, was perfectly preserved in sandstone. Still, it is missing its head, neck and tail.