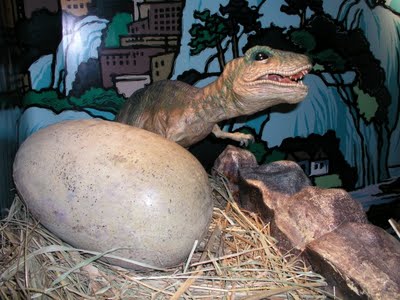 The final thing hatchling Dinosaurs might have seen were giant snakes, researchers say.

Scientists found out the nearly complete remains of an 11-foot-long, 67-million-year-old serpent coiled around a crushed Dinosaur egg right next to a hatchling in the nest of a sauropod dinosaur, the largest animals to have ever walked the Earth.

"We think that the hatchling had just exited its egg, and that activity attracted the snake," said researcher Dhananjay Mohabey, a paleontologist at the Geological Survey of India. It was such a thrill to find out such a portentous moment frozen in time.

The dinosaur eggs likely were laid along the sandy banks of a small, quiet tributary and sheltered afterward by the mother with a thin layer of sediment. These dinosaurs did not seem to look after their young - no evidence for adults has been established at the site.

The fact the bones and delicate structures, such as eggshells and the snake's skull, are set in anatomical order (as they would appear in real life) points to rapid entombment of a serpent caught in the act, as opposed to them all getting washed together after they died.

"Burial was rapid and deep," said Shanan Peters-, a geologist at the University of Wisconsin. Probably a pulse of slushy mud and sand released during a storm.