UAF scientist offers analysis on asteroid and death of dinosaurs 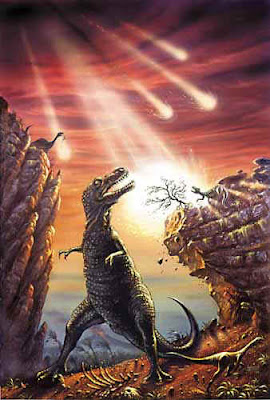 A six-mile-wide asteroid is supposed to have crashed into what is now Mexico's Yucatan Peninsula 65 million years before, triggering a blast that spread death and destruction around the globe.

UAF scientist Michael Whalen is part of a research team that presented a new analysis to support the theory that an asteroid wiped out the Dinosaurs.

Scientists first proposed the asteroid impact theory of dinosaur mass extinction 30 years before. The discovery of a massive crater at Chicxulub [CHICK-shuh-loob], in Mexico's Yucatan Peninsula in 1991, supported that hypothesis.

The Chicxulub crater is more than 120 miles wide - about the distance from Fairbanks to the Arctic Circle - and scientists consider it was created when an asteroid more than six miles wide crashed into Earth 65 million years ago. The cataclysmic impact - a million times more powerful than the biggest nuclear bomb ever tested - triggered massive earthquakes, atmospheric discharge and oceanic upheaval. The ensuing mass Extinction ended both the reign of the dinosaurs and the Cretaceous period, which provide way to the Paleogene period. This theory, having progressively accumulated evidence, was thought to be a near-consensus view.

Some scientists declare that long-term volcanic activity at the Deccan Traps, in what is now India, caused acid rain and global cooling, gradually making life untenable for the dinosaurs and other large animals. They also propose that the Chicxulub impact occurred some 300,000 years before the mass extinctions.