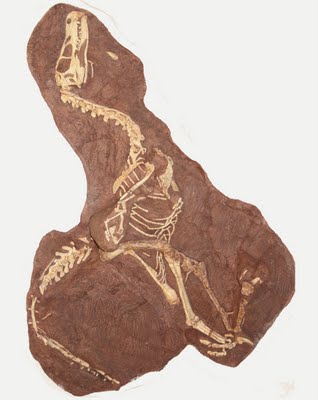 Scientists have found out a new species of Dinosaur that was closely related to the Velociraptor.

The 1.8m-long predator was a dromaeosaurid - a family of theropod dinosaurs from which modern birds come down.

The researchers found out its exquisitely well preserved skeleton in sediments dating from the Upper Cretaceous period in Inner Mongolia.

The Fossilised skeleton was in almost perfect condition - with entire claws and teeth - despite being between 145 and 65 million years old.

Its examination was directed by Xing Xu from the Chinese Academy of Sciences in Beijing.

He and his colleagues described several distinguishing features, particularly of its jaw and feet, that enabled them to recognize it as a dromaeosaurid - a name that means "running lizard".

It had, for example, what the researchers explained as "raptorial claws" on its feet.

The highly evolved predator, which has been named Linheraptor exquisitus, represents an entirely latest genus within that family.

"Linheraptor is alike Velociraptor in many features," wrote the scientists.
They positioned out, however, that it was not Velociraptor's closest relative within the dromaeosaurid family.