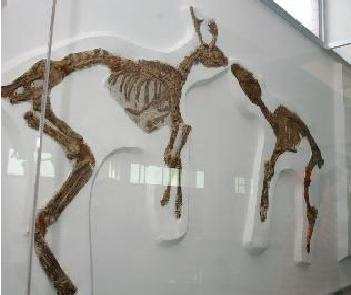 Guinness World Records confirmed that a dinosaur museum in east China's Shandong Province has been the largest of its kind in the world, said by Museum’s officials,

In Pingyi County, the Shangdong Tianyu Museum of Nature which was opened in 2004 is devoted to dinosaur and other prehistoric fauna, applied for a Guinness World Record in early June and received the confirmation.

"It contains 28,000 square meters (301,389 sq ft) of exhibition space, housing 1,106 dinosaur specimens and thousands of other ancient fossils," the London-based agency said in a certificate to confirm it as the world's largest dinosaur museum.

A ceremony to mark the recognition as the world's largest dinosaur museum will be held on Sept. 28 at Tianyu, and officials from Guinness World Records headquarters would attend, Yin said.
Posted by Tamil Nadu ,Tamilnadu Government,Places,Wild Life,Hill Stations,Temples,Sports,Accomodation,Cusine,Fine Art at 10:31 PM