Bird like Dinosaur Fossil May tremble up the Avian Family Tree

In the 150 years while its discovery in Germany; Archaeopteryx has balanced high on the avian family tree as the earliest and most ancient bird, somewhere close to the evolutionary instant when some dinosaurs gave increase to birds. But latest fossil finds shed doubt on this explanation: Archaeopteryx may be just a birdlike dinosaur relatively than a dinosaur like true bird. Chinese paleontologists reported in the up to date issue of the journal Nature that a before unknown chicken-size 155-million-year-old dinosaur with fine hair, named Xiaotingia zhengi, “challenges the centrality of Archaeopteryx in the evolution to birds.” 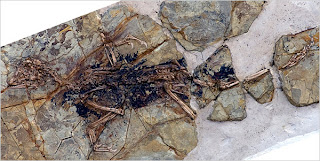 Like a lot of dinosaur’s fossil and other life from the delayed Jurassic period, Xiaotingia was found in Liaoning region, a happy hunting ground for paleontologists. The bones were embedded in shale, next to with the understandable imitation of feathers. Scientists who studied the example said it was not as outstanding in look as several of the 10 known Archaeopteryx remains, but fine enough it seems that to disagree with conventional wisdom about proto-birds. The innovation team and other scientists emphasized that the latest findings, if established by additional research, would not challenge the current assumption that modern birds descended from dinosaurs. The question now is, if not Archaeopteryx, which of a lot of feathered dinosaurs or dinosaur like birds being established is closest to the first bird? Additional assumptions about the early growth of birds, they said, would also require being re-evaluated.
Dr. Xu’s team completed that “the majority significant effect of our analysis” is that the anatomies of the Chinese sample and Archaeopteryx were extraordinarily similar; meaning that together belonged to the extraction of the meat-eating deinonychosaurs, not the plant-eating early birds. In small, Archaeopteryx most probably was not a family bird. The latest discovery of a tenth Archaeopteryx specimen “seriously improved our knowledge” of its similarity to the dinosaur collection and its differences from birds, the paleontologists said. “It may appear deviating to say that Archaeopteryx isn’t a bird, but this thought has surfaced occasionally because as far back as the 1940s,” Lawrence M. Witmer, a paleontologist at Ohio University, wrote in a comments supplementary the magazine piece of writing. “Additionally, there has been increasing nervousness about the avian status of Archaeopteryx as, one by one, its ‘avian’ attributes (feathers, wishbone, and three-fingered hand) in progress showing up in non-avian dinosaurs.”
The researchers themselves, in the middle of the most important dinosaur specialists in China, recognized that their understanding was sure to be contentious. They accepted that some of their conclusions are “only weakly supported by the obtainable data.” At such an early period in the dinosaur-bird transition, distinctions surrounded by species were frequently slight, or “rather messy relationships,” as Dr. Witmer said. Scientists are predictable to take an additional, deeper look at lots of feathered fossil animals that have been exposed in China in the last 15 years. Numerous of these avian dinosaur species, as well as Epidexipteryx, Jeholornis and Sapeornis, may then obtain wing as the innovative early birds. And persistent fossil hunters are sure to turn up new species.
Posted by charles at 12:43 AM