Scientists have exposed a 70-million-year-old nest filled with the ruins of baby protoceraops dinosaurs. The nest of 15 juvenile Protoceratops andrewsi dinosaurs provides clues regarding the dinosaurs' premature behavior. At the same time as large numbers of eggs have been connected with other dinosaurs, such as the meat-eating oviraptor or sure duck-billed hadrosaurs, finding numerous juveniles in the similar dino nest is pretty rare.
Fastovsky and his classmates analyzed the dinosaur leftovers along with the nest, which calculated about 70 centimetres in diameter and was about and bowl-shaped. All were establish at Djadochta configuration, Tugrikinshire, Mongolia, where it's supposed sand "quickly besieged and entombed" the youngsters whereas they were still alive. The researchers finish that the 15 dinosaurs all explain juvenile characteristics. These comprise short snouts, proportionately big eyes, and a lack of adult characteristics, such as the famous horns and large trappings connected with adults of this species. And the smallest amount 10 of the 15 fossil sets is complete. 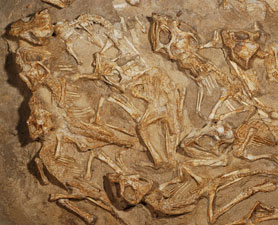 The nest and its contents entail that protoceratops juveniles remain and grow in their nest for the period of at least the premature stages of postnatal growth. The nest additional implies that parental care was provided. The large number of issue, however, also suggests that juvenile dinosaur humanity was high, not only from predation, but also from a potentially demanding situation.
"Large control may have been a way of ensure endurance of the animals in that location — even if there was wide parental care," says Fastovsky. "Mongolia was, at the instance, a place with a range of theropod dinosaurs, a number of who probable ate babies such as these." "The majority obvious of these establish in the same deposits, is the (in) famous velociraptor, a smallish nasty theropod with bad breath, for whom babies such as these must have made a nice bon bon," he continues.
Yet an additional discovery earlier found at the similar locality is the famous "fighting dinosaurs" sample in which a protoceratops and velociraptor come into sight to have been sealed together "sheltered in what was obviously mortal combat," Fastovsky adds.
Posted by charles at 9:38 PM No comments:

Dr Heinrich Mallison, and specialist in dinosaur locomotion, claims the huge predators - such as the Tyrannosaurus Rex - used influential muscles in their hind-quarters to 'power walk' in excess of short distances and grasp up on suspicious prey. Modern thoughts on dinosaur’s composition are that the gigantic species were slow and incapable of sprinting. Certainly, paleontologists consider the T-Rex had legs that were badly equipped to shift such a large bone structure and body at anything more than a relaxed walk. Smaller predators, like the velociraptors that were complete a household name in the film Jurassic Park, were light and responsive adequate to rundown their victim. But studies of Tyrannosaurus Rex, particularly its knee and ankles, guide experts to consider that it might not attain or maintain a decent pace. 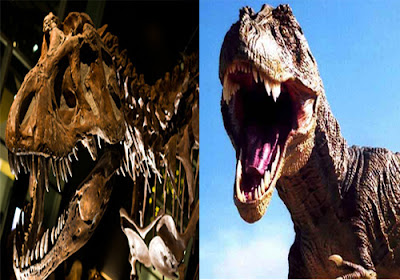 In addition, paleontologists have been using an essential formula for decades, measuring the length among fossilized dinosaur footpath. T-Rex's pace is comparatively small, pointing to slow movement. Dr Mallison thinks in a different way. He argues that the organization of dinosaur's back limbs is noticeably different from that of present mammals and birds, meaning the pace formula aren’t a fine pointer of what dinosaurs can actually do. As an alternative, Dr Mallison believes main buttocks muscles of the T-Rex - not seen in present animals - might push it at high speeds over short distances.
By means of similar principles as a power rambler, a rapid sequence of small strides would see them to their tasty target. Dr Mallison told that this method could be frequent, irrespective of weak joints. Unfortunately, it also means those decades of learn into dinosaur group and motion might be unfounded.
Posted by charles at 2:41 AM No comments: 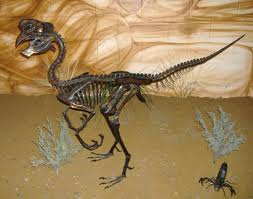 Scott Persons from the University of Alberta begin studying the tails of different species of Oviraptor as part of a superior study on the tails of all theropods, a group of dinosaurs associated intimately to modern-day birds. According to him, the dinosaurs have curiously compressed, flexible tails, and joint with a fan of feathers attached to the tail's last part; this would have enable Oviraptor to place on a show alike to that of a modern-day peacock. "The tail of an Oviraptor by evaluation to the tail of the majority of other dinosaurs is attractive darn short," Persons said.
"But it's not tiny in that it's missing a whole group of vertebrae; it's short in that the entity vertebra surrounded by the tail themselves is kind of packed in together. So they're tightly packed," he said. The thick bone arrangement could have made the tails particularly flexible, like a person's backbone with its many bone junctions can move more lithely than an arm, which has only a pair of joints. The study also suggests that oviraptorids had mainly muscular tails, and fossil impressions make known that they also came prepared with a fan of feathers at the last part of their tails, close to a piece of merged vertebrae not dissimilar those found in the tails of modern-day birds.
"If you join that with having a powerfully built, very flexible tail, what you have is a tail that might, potentially slightest, have been use to exhibit, to gesture that tail-feather fan.
Posted by charles at 12:52 AM No comments: