Two Latest species of horned dinosaurs has been named

In a latest study, scientists have named two new horned dinosaur species based on fossils collect from Alberta, Canada. The latest species, Unescopceratops koppelhusae and Gryphoceratops morrisoni, are from the Leptoceratopsidae group of horned dinosaurs. The herbivores live in the period of the Late Cretaceous between 75-83 million years ago. “These dinosaurs fill significant gaps in the evolutionary history of small-bodied horned dinosaurs to facilitate lack the large horns and frills of connections like Triceratops from North America,” Michael Ryan, guide author of the learn from The Cleveland Museum of Natural History, said. “Even though horned dinosaurs originate in Asia, our investigation suggests that leptoceratopsids radiate to North America and diversified here, ever since the latest species, Gryphoceratops, is the initial record of the group on this continent,” he said. Unescoceratops koppelhusae lived about 75 million years ago. It considered about one to two meters in length and weighed less than 91 kilograms. It had a small frill extend from behind its head but did not have ornamentation on its skull. 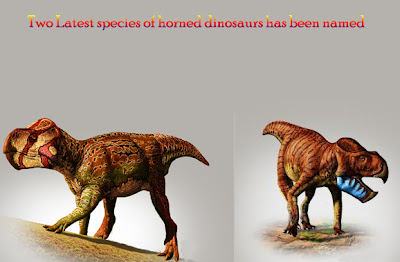 The dinosaur has a parrot-like beak. Its teeth are lower and rounder than those of any further leptoceratopsid. In addition, its hatchet-shaped jaw had a separate piece of bone that predictable below the jaw like a small chin. The lower left jaw piece of Unescoceratops was exposed in 1995 in Dinosaur Provincial Park, a United Nations Educational, Scientific and Cultural Organization (UNESCO) World Heritage Site through Philip Currie, Ph.D., at the present of the University of Alberta. Initially described in 1998 by Ryan and Currie, the dinosaur was referred to as Leptoceratops. Following research by Ryan and David Evans, beginning the Royal Ontario Museum in Toronto, Canada, strong-minded the specimen was a latest genus and species. The genus is named to honor the UNESCO World Heritage Site title for the region where the specimen was established and from the Greek “ceratops,” which means “horned face.”
Posted by charles at 11:32 PM