Titanosaurus indicus a Sauropod, is the first dinosaur to be discovered in India. It was found in place called Bara (big) Simla hill near the army camp in Jabalpur. This dinosaur is one of the giant herbivores of the Cretaceous period. The fossils of Titanosaurus and some other dinosaur have been discovered around the large area of Narmada river.

Jabalpur army camp has another hill close to Bara Simla hill is Chotta (small) Simla hill. As u climb up the Chotta Simla hill, broken pieces of fossil bones can be found. At the foot of the hill under the boundary walls of the Gun Carriage Factory, it is one of the India's largest artillery and armaments factories.There is a temple called the Pat Baba mandir dedicated to Hanuman and other Hindu gods. The temple protects the fossils of bones, eggs and nests that were discovered from the hills. The followers offer protection because they believe that these fossil eggs are the demons slayed in the forest by Lord Shiva. Unfortunately, many eggs and fossils were damaged and lost during the temple renovated in 2011. Now only few fossils are there under the protection of those temple priests.

Not only Titanosaurus, small carnivorous dinosaurs like Indosaurus (defines Indian lizard) and land crocodiles like Laevischus (defines light crocodile) lived in the dense forest along the river Narmada. Another killer dinosaur found was Indosuchus. It is massive dinosaur which had a skull of one meter and with the sharp font teeth of 10 cm length. The fossil of this dinosaur have been found in many parts of Narmada and the pieces of backbone found in the limestone beds of Ariyalur district of Tamil Nadu.

The fossils of another ferocious species is found in the place called Hill Temple close to the river Narmada. They took 8 months to clean and assemble the bones of this dinosaur. It was named as Rajasaurus narmadensis (defines king lizard of Narmada) . Even it is smaller than Tryannasaurus rex, it is wilder and more aggressive. The structure of the dinosaur shows that it has the ability to act quicker and bite stronger than T.rex.

Posted by charles at 4:17 AM No comments:

Beak instead of teeth

The paleontologist discovered a dinosaur which is a part of T.rex and modern birds which starts its life with a informal set of teeth. When they grow up they lose all the teeth and in that place a beak is sprouted instead of it. The scientist name this dinosaur Limusaurus inexricabilis which means inescapable mud lizard. These dinosaurs are in the size of a dog. This is the first time, scientist found this type of transformation from any living, dead or extinct species. Only platypus and few species in fish can go through this development tooth loss. This is the first fossil to be discovered of this kind. This helps the researchers to discover the evolution of the beak in modern birds.

Limusaurus roamed in north eastern China during the late Jurassic period between 156 and 161 millions years ago. Most of them died in mud pits, these small dinosaurs weren't able to escape from that sticky mud. Million of years later it turns them into fossils.

Xing xu, a paleontologist of the Chinese academy of science with his colleagues discovered different specimen of different ages. They found 19 individuals, among those they grouped 13 into different age from hatching to adult. They also discovered that Limusaurus is the only one of Jurassic period with a beak and gizzard.

When they compared Limusaurus of all different age groups they found something vast. The hatching's are found with teeth which falls later leaving an empty socket on the jaw. It helps the young one to tear the meat but the adult are found to have a vegetarian diet which is weird. Due to this transformation the young and the old  can live together without competing for food. Because of this, the young can grow without any scarce in food but they have to stay away from the sticky mud.

Posted by charles at 4:04 AM No comments:

A New species of dinosaur discovered in Australia

Paleontologist discovered a new species of dinosaur in Australia. The scientists depicts that the dinosaur will have wide-hip, long-neck, four legs, about half the length of the basketball court, and it's shoulders stand as high as hoop. It is a plant eating dinosaur. Fossils found in Australia are exceedingly rare. This new species is named as Savannasaurus Elliotorum after the Elliot family and green grassy region where they the found it.

David Elliot stumbled over these fossil in 2005 while he was herding sheep in the northern Australian town of Wilton. First he thought it was fossils of limb bones, then his wife Judy Elliot fit those pieces together which makes them realize that it was a massive toe of a big plant eating dinosaur. Rest of the fossils helps them to discover that it belongs to a entirely new species of vegetarian dinosaurs called Sauropods.

David Elliot is the chairman of the Australian Age of Dinosaurs Museum now. After 10 years, team work of scientists led by Stephen Poropat officially announced his discovery about the new species Savannasaurus Elliottorum.

The skeleton of Savannasaurus Elliottorum is one of the most complete Sauropods discovered in Australia. Poropat say that the dinosaur height is probably about 50 feet long with a long neck and a wide round body with an approximate weight of 40,000 pounds as much as the weight of 3 African elephants. They haven't found any fossil teeth to find what the dinosaur ate. But the dinosaur grow to that size on a low-quality diet.

95 million to 98 million years ago, Savannasaurus Elliotorum lived in Australia with other two Titanosaurs. No-one knows how these dinosaurs spread to Australia. During that period Australia was connected with South America by Antarctica. They have never found a Sauropod fossils more than 105 years old, the scientist that it may have traveled from South America through Antarctic during a warm period. There is a possibility in the presence of the Sauropods, but their bones didn't survive long enough to be discovered.

"Anytime you put a name on a dinosaur it’s a hypothesis and it’s one that’s going to be tested and tested in the future, and we are hoping of course that Savannasaurus will stand the test of time," Poropat says.

Posted by charles at 4:00 AM No comments: 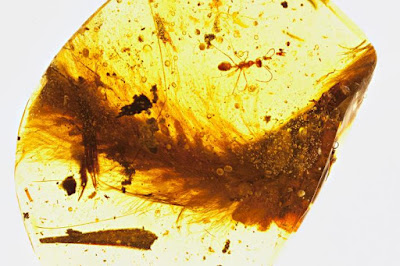 The scientist found a 99 million year old dinosaur feather. This feather includes bones, soft tissue and even feathers. This feather is found and preserved in Amber.

Already the evidence for feathered dinosaur have been found in fossil impressions in Amber. But this is the first time that they found a clear well-preserved feather. This helps the scientist to know more about the evolution and structure of the dinosaur feathers.

The paleontologist Lida Xing of China University of Geo-science led this research. This research was funded by National Geographic Society's Expeditions Council.

It is a semi-translucent mid-Cretaceous sample. The hard shapeless piece of resin is in the size of a dry Apricot which tells the difference between a birds feather and a dinosaurs feather. The delicate feather is appended by lump of resin of 1.4 inch size. It looks like a  brown chestnut with white or pale bottom.

The result of the CT scan reveals that it is a eight vertebrae from the middle or end of a long thin tail. The tail is organically made up of more than 24 vertebrae. From the analysis of the tail the researchers believe that it belongs to juvenile coelurosaur, which is a part of theropod dinosaurs that includes everything from tyrannosaurs.

The same research team revealed a report in June saying that the wings of  Cretaceous-era bird preserved in Amber is similar to the wings of present modern birds.

Xing believes the conflicts between the Myanmar government and the Kachin Independence Army, which controls the Hukawng Valley is nearing end. This help the researchers to increase the scientific access to the Amber mines which leads to spectacular discoveries.

"Maybe we can find a complete dinosaur," Xing said.

Posted by charles at 3:44 AM No comments: